OK, I’m going to pick up where I left off last time, so if you’re unfamiliar with this string of posts, please click here to catch up 🙂

You’ve made some wonderful suggestions, and so I thought I’d propose nominations to a few of the categories that have been put forward…

Enjoy! And, as always, feel free to chip in with your own ideas in the comments section…

The Minds – in the Culture series by Iain M. Banks

Fiver the Rabbit – in Watership Down by Richard Adams

The Wart, in T.H. White’s The Sword in the Stone (nomination by Jon that I completely agree with!)

Hermione Granger – in the Harry Potter series by J.K. Rowling

Lucy Pevensie – in the Chronicles of Narnia series by C.S. Lewis

Alice – in Alice in Wonderland by Lewis Carroll

The beheading of Ned Stark – in A Game of Thrones by George R.R. Martin

The death of Albus Dumbledore – in Harry Potter and the Half-Blood Prince by J.K. Rowling

The death of Emma Morley – One Day by David Nicholls

The revelation that Mad-Eye Moody is, in fact, Barty Crouch Jnr., disguised by Polyjuice Potion – in Harry Potter and the Goblet of Fire by J.K. Rowling

A countdown that never reaches its climax (at the time, I didn’t know more books were coming!) – in Oryx and Crake by Margaret Atwood

A writer who gave up on a wonderful series due to fan pressure. Such a shame. – The Dark Tower by Stephen King

What utter nonsense! – Breaking Dawn (well, actually, all of them, but my sister promised me a war in this book I just didn’t get! Grrrr…) by Stephanie Meyer

You’re left waiting for an ending that never comes. – in The Crying of Lot 49 by Thomas Pynchon

Alobar and Kudra – in Jitterbug Perfume by Tom Robbins

Gandalf the Grey – in The Fellowship of the Ring by J.R.R. Tolkien

Cecilia – in The Virgin Suicides by Jeffrey Eugenides

The ‘Stone’, the ‘Axis City’, just… everything – in Eon by Greg Bear

The everlasting goods introduced by the aliens, such as the ‘Forever-Car’ – in Ring Around the Sun by Clifford D. Simak

The ‘Point of View’ gun, the ‘Infinite Improbability Drive’, the ‘Babelfish’… again, pretty much everything – in Hitchhiker’s Guide to the Galaxy by Douglas Adams

The ‘Intercision’ device – in Northern Lights by Philip Pullman

Which other awards, or nominations, do you think should be included?
Let me know in the comments box below! 🙂

As some of you might already be aware, this week (21st – 27th September 2014) is Banned Books Week. Held annually (usually in the last week of September), this event celebrates our freedom to read and to express ideas, even those books which are considered by some to be unorthodox, offensive and/or unpopular.

To mark this occasion, I thought it would be appropriate to spend some time this week taking a look at a few of the most important, influential, beautiful, and controversial books that, at some point in history, have been banned. My intent here is not necessarily to endorse these books (although, there are some on this list that I believe everyone should read at some point in their lives), but to simply celebrate the fact that we now live in a world where books no longer need to be burned. After all, as Mary Jo Godwin once said, “a truly great library contains something in it to offend everyone”.

So, on to my eleventh and twelfth and considerations of the week…

No doubt about it – A Clockwork Orange is a dark book, indeed. Made famous by Kubrick’s film adaptation of the same name, it tells the story of young teenager, Alex, who loves nothing more than a glass of milk-plus, the sounds of Beethoven’s symphonies, and a cheeky bit of ultra-violence when on a night out with his droogs. The novel is largely centred around the ideas of free will and nature versus nurture (or how much of our personality and choices are determined inherently rather than learned), but also wholeheartedly embraces the aestheticisation of violence – that is the depiction of graphic, over-the-top, excessive violence in a stylised, exaggerated fashion. It is for this reason that, when published in 1962, the book was widely banned in the UK and USA.

What many people don’t know about this book is that it is rumoured that Burgess was prompted to write it when trying to understand the motivations of the men who violently attacked him and his wife at their country home – an attack which is mirrored in the opening stages of the novel, wherein a couple are tricked into opening the door, beaten half to death, and the wife violently gang-raped. By telling the story from the youngster’s perspective, Burgess was effectively trying to climb into the head of the men who sought to hurt him and his wife without reason – this is, perhaps, one of the main reasons for him choosing to tell the story is such an unusual and iconic dialogue. The whole book has the greasy, easy feel of slang about it, despite the protagonist’s eloquence, because of Burgess’ introduction of an entirely new vocabulary.

Let’s get one thing straight right now – this book is not going to be everyone’s cup of tea. It is gritty and unapologetic, and is not afraid to get it’s hands dirty to tell a good story. There are scenes in it which will never quite leave you. However, if you’ve got the stomach for it, it’s a powerful novel. The only criticism I have of it is the happy ending that Burgess decided to pin onto the end – his way of expressing his hopefulness for the future; that this ultra-violent nature is something which can be grown out of. I prefer Kubrick’s ending, wherein all hope is lost… but then, I never did like a happy ending. 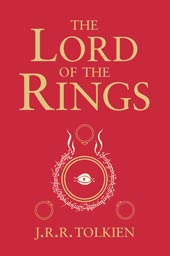 Thanks to Peter Jackson, you would have to travel pretty far to find someone who has never heard of The Lord of the Rings – with the films inspiring a new generation of readers, these books continue to draw in the crowds when other works of the same age have long been forgotten. It may come as somewhat of a surprise, then, that Tolkien’s classic trilogy, along with The Hobbit, has been banned in many schools and public libraries across America and England.

There are two main reason put forward for this: the first is related to the Hobbits’ smoking habits. It seems a strange criticism, but given the likeness between children and Hobbits, organisations such as the NHS have stated that allowing children to watch or read such material could be detrimental to their health. Now, I have to admit to being highly cynical regarding this ‘monkey see, monkey do’ philosophy that is used to justify criticisms of everything from punk music to violent video games, but for me, this isn’t really a justification to ban such a wonderful set of books. I mean, I read them, but I didn’t immediately set off for the nearest volcano, looking for some jewellery to destroy, now did I?

The other main criticism of the books relates to them being deemed ‘irreligious’, despite the fact that Tolkien was a devout Catholic and that in the Lord of the Rings, he felt he had consciously created a “fundamentally religious and Christian work.”  It is true that the novel contains quite noticeable Christian themes and subtexts, but this apparently has been lost on many, including the Christian schools that have fought so hard to ban these books.

If you’ve never gotten around to reading them, then I warn you, they can feel pretty long when you’re reading them. You will never read about so much damn walking in your entire life. Even the trees walk! However, that said, the characters will charm you, the languages and landscapes will amaze you, and you’ll find yourself sitting up for hours at night, just to stay with the characters a little longer. After all, no one wants to leave a friend in need, and that’s what Frodo and the gang will become – old, dear friends, with whom you once shared a great adventure. Don’t deny yourself the pleasure…